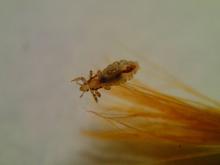 Pest description and damage Three species of lice affect humans. They can be distinguished by where on the body they appear.

These grayish-white ectoparasites spend their entire life cycle on their hosts, except for the body louse, which rests on clothing when not feeding. This characteristic of the body louse creates the potential for widespread infestations under unsanitary conditions.

Body lice are rare in industrialized countries, except among the indigent population, and can be effectively controlled by regularly changing and laundering clothes. Pubic lice are generally transmitted through intimate human contact: infestation should be treated under a doctor's supervision. Head lice are a common problem among children in schools and day-care facilities. Transmission is most often through direct contact; indirect transmission (via clothing, hats, brushes, etc) is much less common.