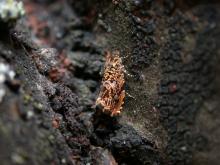 Pest description and crop damage Cherry bark tortrix (CBT) occurs in Eurasia, Africa, and North America. CBT was first discovered in North America in 1989. By 1998, CBT was found in the Pacific Northwest as far south as Centralia, WA. CBT is slowly moving in surges southward and can be found as far south as Clackamas County. Eastern movement has yet to be seen due to the barrier of the Cascade Mountain range. Conditions in eastern Washington may not be favorable for CBT to survive except in protected riparian areas. CBT is a pest of most woody ornamental trees and shrubs in the family Rosaceae. CBT attacks Prunus (cherry, plum, and peach), Malus (apple, crabapple), Pyrus (pear), Crataegus (hawthorn), Sorbus (mountain ash), Cydonia (quince), Pyracantha (firethorn), and Photinia. The larvae are 0.33 to 0.4 inch long, pale gray to flesh-color with small, pale gray spines scattered on the surface, with a yellowish-brown head. Larvae feed directly on the cambial tissues of the tree and may cause death of the tree in sufficient numbers. Otherwise, the feeding activity decreases the supply of nutrients to the tree and increases susceptibility to disease, insect attack, and environmental stress, including cold injury. The first indication of attack is the exuding of gum-like resin, which often is mixed with fecal pellets and silk. The trunk and larger limbs of bearing fruit trees are affected, usually at pruning wounds.

Biology and life history CBT larvae overwinter under bark. During spring, they resume feeding and eventually pupate in a silken tube that protrudes beyond the bark surface where they were feeding. In Europe, pupation takes place from April until late August and lasts about 2 weeks. Adults fly from late April to September and are most active in the early morning; some may be attracted to lights at night. Eggs are laid on tree bark, in crevices, or under loose bark, primarily at wounds (mechanical or old infestations). Eggs are placed singly or in overlapping groups of two or three and hatch in 2 or 3 weeks. Hatching larvae penetrate the bark through openings (natural and mechanical wounds) and feed on the living tissue of the tree's bark. Graft unions of ornamental trees are preferred sites for attack. Larvae do not penetrate the hardwood of the tree. During feeding, CBT larvae construct a frass tube consisting of fecal pellets and webbing. The tubes are about 0.25 inch long and look soft, as if they are made out of sawdust. They probably will be around the base of the trunk or where a branch and trunk meet. The frass tube is the location for pupation once CBT has completed the larval stage.

Scouting and thresholds Frass tubes are an excellent indication of CBT infestations, and susceptible trees should be monitored regularly. Since other insects can cause similar damage, inspection of the larvae is required for confirmation.

Although some wasp species parasitize the larvae, effective biological control does not occur at present. Avoid sprays which will disrupt whatever control does occur.

Avoid unnecessary pruning cuts or injuries to the tree. Like most wood-boring insects, CBT is attracted to stressed trees. Keep trees as healthy as possible with appropriate watering, fertilizer applications, and pruning. Remove heavily infested branches or trees.

Control is best when insecticides are applied during the end of September to the beginning of October, when insect flights are finished, temperatures are moderate, and conditions are dry. Only spot-treat areas of the tree trunk, graft union, and large scaffold branches. Do not treat the tree canopy. Apply treatment to areas of frass tubes with low pressure until runoff. Little product is needed for good control.