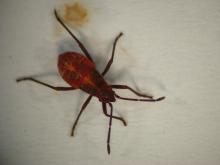 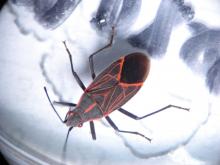 Pest description and damage The adult boxelder bug is a red, flat, and elongate bug about 0.5 inch long. The front wings and thorax are gray-black to black with thin bright red markings. The eggs are red and the bright red nymphs look like the adult without wings. Damage to host plant seed is minimal since damaged seeds are shed later in the season. The major objection to these bugs is that they congregate in clusters on the outside walls, and then invade the home in fall and spring. They are found in large aggregations on the seeds of boxelder, and to a lesser extent maple and ash. They are known to feed on developing apples, pears, grapes, peaches, plums and cherries when their populations are high.

Biology and life history The boxelder bug adults overwinter in cracks and crevices, or under siding of houses or in other protected sites. They may emerge on sunny days in winter. In spring, the boxelder bugs adults move from their protected areas and lay red eggs in bark crevices of host trees. Both adults and nymphs feed on leaves, flowers, fruit and small twigs until they move to the seeds. There is only one generation per year.

Pest monitoring Check new growth on trees or use a beating sheet and dislodge the boxelder bugs.

Remove female boxelder bugs where they congregate. Seal cracks and crevices on houses to keep bugs out.