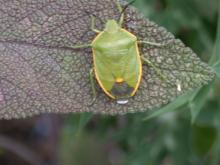 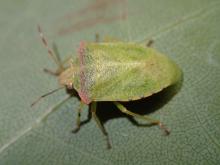 Pest description and damage Stink bugs are true bugs with a distinctive, triangular area (scutellum) that extends between the hemi-elytra or forewings of stink bugs. The forewings are partly leathery at the base and partly membranous toward the tip. Stink bugs have straw-like sucking mouthparts, through which they can inject a digestive fluid and suck back the digested contents. Stink bugs have incomplete metamorphosis (eggs, nymphs that look like adults without wings, and adults). Stink bugs are found on weeds and native and ornamental plants that have abundant seeds pods, berries, or other fruit; also, they can feed on plant cells or sap. Some stink bugs are predators on other insects, including other stink bugs. Generally, stink bugs do little damage to landscape plants, but they can harm the fruit, berries and pods. They are commonly found on weed pods, raspberries, and berries. The brown marmorated stink bug (BMSB) is a newly introduced invasive species that has proliferated and become a major pest of all plants where it has established.

Biology and life history Stink bugs lay barrel-shaped eggs in clusters on or near food plants or seeds. The young larvae are often brightly colored, very rounded, and they cluster on the eggs when they first hatch. They change to their adult colors as they molt toward maturity. Then they disperse to feed on nearby fruit or seeds. As the BMSB seeks shelter in homes, or protected places in the landscapes, they can be easily moved around the country with household belongings so they have spread rapidly across the US. The first detection of this Asian invasive species in the PNW was in Oregon in 2004 and it is now a major pest here. It has been found in WA and ID, but only in small numbers.