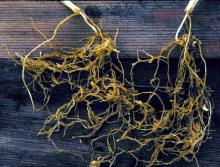 Note the small galls on the roots.
Kathy Merrifield, 2000.

Cause The root-knot nematode, Meloidogyne naasi, lives on roots of barley, wheat, other cereals, and grasses, primarily in heavy soils. Populations of infective juveniles are large only in spring. Spring-planted cultivars are more damaged than winter cultivars because the latter are larger when attacked. The disease is a problem in western Oregon. The Columbia root-knot nematode (M. chitwoodi) does not produce yield-depressing symptoms in wheat but will produce small root galls.

Symptoms In early spring, stunted and yellowish plants appear in zones of the field. Foliar symptoms tend to disappear with favorable growing conditions. Small knots and galls are on affected roots. Frequently it is difficult to distinguish between damage caused by excessive water and by root-knot.

Sampling Root-knot nematodes are sedentary endoparasites. Only second-stage juveniles (the infective state) and adult males (which may be rare) are in soil. When sending samples for diagnosis, it is best to include roots as well as soil.