There are numerous dead branches in the crown of all these trees. All of the trees were removed within 5 years.

These 3 black walnut trees have different amounts of Thousand Cankers Disease. The tree on the right is almost dead and should be cut down. Tree on the left has very little dieback and does not need management. Tree in the middle could use some pruning; if dieback continues then one might consider removal.

The fungus Geosmithia was isolated from the discolored cambium associated with these beetle galleries.

Dieback in this tree was followed down the trunk to this margin where dead black cambium above (right) meets healthy cambium below. We suggest to prune below this margin. 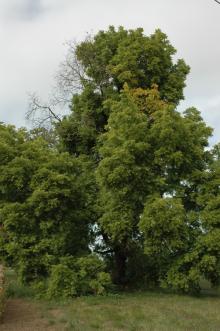 Walnut twig beetles are very small and can be seen as light brown in these exposed galleries while larvae are white.

Cause A fungal disease (Geosmithia morbida), vectored by the walnut twig beetle (Pityophthorus juglandis), that can cause death of black walnut (Juglans nigra). The disease has been detected in many Western States including eastern Washington, Idaho, and throughout Oregon on both sides of the Cascade Range (although insect trapping in the Grand Ronde Valley of Oregon did not detect the beetle). Several quarantines of plants, wood and wood products have been established in some of the states in the Eastern United States. It was first noticed in Oregon during the early 1990's. Most of the trees impacted at that time were on poorly drained soils in the mid-Willamette Valley area. The majority of the problem seemed to have occurred over a 3-year period. There were few complaints about this problem until 2001 when this dieback occurred on a wide variety of soil types, including productive agricultural soils, in the Portland metropolitan area. Beyond the Pacific Northwest it has now been confirmed in Indiana, Maryland, Ohio, Pennsylvania, Tennessee, North Carolina, Virginia, and Italy. It is suspected in Illinois and Minnesota.

The canker causing fungus Geosmithia morbida has been found in association with walnut twig beetles and their galleries. Fungal spores are carried and introduced into the tree by adult beetles during gallery construction. Subsequent canker development in the inner bark disrupts the flow of nutrients throughout the tree. There have been 18 different insect species to date found positive for the fungus. Armillaria root rot has also been found along with declining trees. It has been hypothesized that the phloem-limited cankers starve the trees for nutrients and reserves thereby weakening them and encouraging other diseases and winter injury to ultimately kill the tree. Phytoplasma testing during the 08 growing season was negative and remains an unlikely cause of this problem.

The walnut twig beetle adults are very small and are reddish-brown in color. It is a typical-looking bark beetle with four to six concentric ridges on the upper surface of the pronotum. The larvae are white, C-shaped, and found in the phloem. Egg galleries created by the adults are horizontal (across the grain) and the larval galleries tend to be vertical (along the grain). There are most likely two main peaks of flight. One in May/June and another Sept/Oct. Flight often occurs when the temperature is 65°F or above. Adults respond to volatile extracts from girdled branches.

Small diameter black walnut (Juglans nigra) trees in Colorado died within one to two years after first symptoms were observed. Decline and death occurs much more slowly in the PNW on large diameter black walnut hybrids (J. nigra x J. hindsii). Young, small diameter trees found growing near declining trees rarely have symptoms. Western black walnut species may host both insect and fungus, show minor symptoms or even appear to recover in succeeding years. Preliminary testing found J. nigra to be much more susceptible than J. hindsii or other Juglans species. This may account for the different disease progression in different areas. It was also found that the difference between severe disease in western states and less disease in eastern states may be due, in part, to the microflora (phytobiome) each supports in these different geographical areas. English walnuts (J. regia) are not as susceptible but the disease is easily found in English walnut orchards.

Symptoms The dominant symptom is that branches fail to leaf out in the spring. Branches may leaf out very weakly in the spring or, less often, die anytime during the summer. Some trees will express sudden dead wood and/or progression of symptoms during the growing season. Generally dead leaves do not remain on the declining branches. Dieback always appears to start in the upper crown and progresses to lower branches in succeeding years. Some trees appear to have top dieback appearing almost concurrently with limb dieback at various places throughout the crown. Some trees may exhibit a thin canopy with few yellowing leaves. Trees may die within 2 to 5 years once symptoms are noticed but the majority, experience a slow dieback over many years. This problem has been observed mostly in mature trees of large diameter (DBH).

Carefully remove the bark from symptomatic limbs to find cankers. When peeling the bark, do not cut too deeply as beetle galleries and fungi are found in the living bark (cork cambium and not the wood cambium). Individual cankers may at first be only a few millimeters in diameter, but ultimately can be 3 cm or greater and have an elongate oval shape. Typically the appearance of a shallow tunnel produced by the walnut twig beetle will be present near the center of the canker. Many small, dark, dead areas (cankers) can be found under the bark of heavily infected trees. The cumulative effect of innumerable cankers produces limb girdling that cause dieback.

No witches' brooms have been observed on declining trees. Sometimes epicormic shoots will be seen but if present they are not abundant, except in The Dalles, Oregon where epicormic shoots are very numerous. Declining trees do not consistently have visible trunk cankers, heart rots, butt rots, storm damage, commercial pruning or herbicide use in common.

Chemical control None is known. Research on insecticides and/or fungicides applied to the trunk, crown or soil or injected into the tree has not been done. Most experts agree that these applications would have minimal if any effect on disease progression. In Colorado, infested black walnut trees that have received repeated commercial insecticide treatments have continued to decline and die. Investigations on insect repellants (such as racemic limonene) are an active area of research.

It is not known if treatments to control powder post beetle on lumber will also control walnut twig beetle.

Injection of bactericides for the control of phytoplasma is not justified.