Note the circular damage pattern in this field, where plants are also affected by Verticillium wilt. 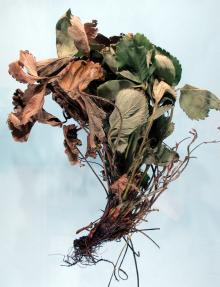 Older leaves wilt and dried out while inner (younger) leaves have remained green although stunted.

Cause Verticillium dahliae, a soilborne fungus that can live many years in soil. The fungus grows into the xylem where it colonizes the plant through mycelial growth and conidial production. Fluid movement in the xylem passively transports the conidia. Once in the xylem, this fungus partially blocks water movement and produces toxins that result in wilt symptoms. Isolates that can attack strawberry have a wide host range, so it is not advisable to plant strawberry after solanaceous (potato family) or small fruit crops that have shown evidence of the disease. Many cultivars derived from resistant clones of Fragaria chiloensis, F. virginiana, and F. virginiana subsp. glauca are resistant to strains of Verticillium.

Symptoms Individual plants wilt, sometimes in patches in the field. It is often confused with other root and crown rots, winter injury, and Tomato ringspot virus infection in cultivars such as Olympus. Plants are most severely affected in their first year.

Older leaves wilt and tend to curl up along the midvein. Inner (younger) leaves tend to remain green although stunted. Plants often are stunted, dry, and flattened with small yellowish leaves, especially as fruit ripens. Brownish streaks occur in vascular tissue of crown roots or at the base of the petiole.

Note: Research in California and Florida has not identified any nonfumigant chemicals or microbial based products that provide consistently effective control of strawberry root diseases.