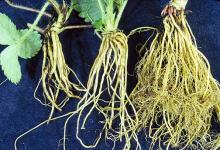 Heathy root system on the right and high nematode populations affecting the root systems in the middle and left.
Photo by Kathy Merrifield

Note the necrotic areas on these strawberry roots caused by the lesion nematode.
Photo by Kathy Merrifield

Cause Pratylenchus penetrans and P. crenatus, nematodes that live in soil. The nematodes migrate through and feed in the root cortex. The surrounding root tissue dies and can be seen as discrete lesions. Legumes such as clover, alfalfa, and vetch often harbor large populations of root-lesion nematodes, which may affect future strawberry plantings. The number of nematodes in the soil can be a rough guide to possible plant damage. Factors such as crop age, planting frequency, presence of other diseases and pests, and adverse growing conditions influence the effect of certain nematode populations on plant growth. In some cases, 300 nematodes/100 g of soil affect plant growth, but much higher populations often have little effect. Root-lesion nematodes are migratory endoparasites; part of the population is in soil and part in the roots at all times.

Symptom Infected plants are dwarfed, off-color, and grow poorly. Reduced runner production, depressed yields, and shortened life of the planting also occur. Damage is frequently seen as spots in the field. Roots have individual brown lesions that can be so numerous that the root is girdled.

Sampling Always include soil and roots in samples sent for nematode analysis if plants are present. Take samples any time if the numbers are interpreted in relation to nematode population dynamics. In most crops, populations are relatively low through winter and spring but increase rapidly through summer. Before planting strawberries, it is best to sample in late summer.

Reference Pinkerton, J.N. and Kitner, M.L.C. 2006. Effects of biologically-derived products on mobility and reproduction of the root-lesion nematode, Pratylenchus penetrans, on strawberry. Nematropica 36:181-196.