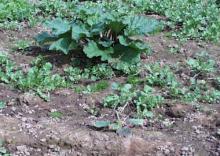 A field of rhubarb with red leaf symptoms. An infected plant is in the foreground, a healthy rhubarb is behind.
Photo by Cynthia M. Ocamb, 2000. 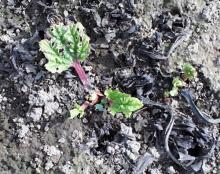 A closer view of an infected rhubarb plant.
Photo by Cynthia M. Ocamb, 2000. 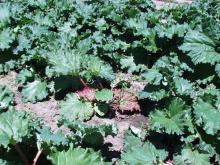 Affected plants have reddish leaves and are smaller in size than healthy plants.
Photo by Cynthia M. Ocamb, 2003 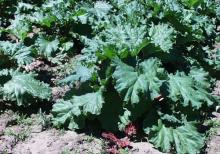 The differences between healthy and affected plants can be dramatic when infection is severe. The small, reddish plant at the bottom of the photo is severely infected.
Photo by Cynthia M. Ocamb, 2003

Cause The bacterium, Erwinia rhapontici (syn. = Bacterium rhapontici), can cause a crown rot of rhubarb, known as Red leaf or Bacterial soft rot. How the pathogen survives and is dispersed is not well understood. It is suspected that the disease may be spread by plant-feeding insects or by the use of infected root stock.

Symptoms A decay of the crown and terminal buds, brownish rot of pith tissues, and formation of cavities in the crown. A brownish rot begins just below a bud near soil level. Rot gradually extends to tissue above the infection point until it reaches the root's center. The entire plant crown can turn black, and cavities can form within infected crowns. The root's center may become hollow. In wet weather, decay sometimes extends up into the base of the stalk of older leaves. Leaves may be dull red or yellow, and stalks eventually collapse. Spindly side shoots may grow out, but usually they rot off. It may be several months after initial infection before aboveground symptoms are apparent.