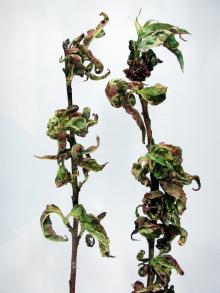 Leaves of this 'Brooks' prune are deformed very similarly to peach leaf curl.

Cause Taphrina pruni, a fungus that overwinters on old diseased fruits clinging to the tree or on the ground. The disease seldom occurs and has not caused economic loss.

The fungus T. pruni-subcordatae causes a witches' broom of escaped prunes along fence rows and of Pacific plum (P. subcordata). Common in the Willamette Valley of Oregon.

Symptoms Twigs, small branches, and young leaves often are distorted and swollen. Some leaves may have a yellow or red cast. Infected fruit is particularly striking: swollen, bladder-like, often yellowish at first, and later becoming dark brown to black. Before drying and mummifying, it is soft, puffed up, and somewhat hollow and spongy.

Witches' brooms arise from thicken or swollen branches that produce numerous shortened shoots. Leaves are thick and curled early in the season but leaves produced later are normal. Fruits are normal.