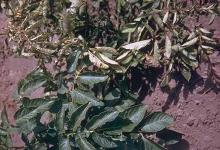 Note the plant at the top of the picture with bronzed, rolled leaves.
Photo part of OSU Extension Plant Pathology Slide

Cause The Potato leafroll virus (PLRV) is transmitted by at least 10 species of aphids, in a persistent manner. Once an aphid acquires the virus, it can transmit it for life, but not pass it on to its offspring. The green peach aphid is the most important vector in our area. Infection may come from plants grown from infected tubers or from current season infection by aphids bringing the virus in from other sources. Potential damage is greatest from planting infected seed tubers since this provides a source of the virus in the potato field. Epidemics may be generated from as few as one infection center (e.g. one infected tuber) per acre when aphids are not controlled. The amount of virus allowed in certified potatoes differs among states.

In Idaho seed growing areas, plants purchased for home gardens have been found to harbor both the virus and aphid vectors.

Yield reduction (reduced numbers and size of tubers) is greatest for plants derived from infected tubers, followed by plants initially virus free but infected early in the season from viruliferous aphids. Mature plants show resistance. Besides yield loss, important losses also occur from tuber net necrosis, which occurs only from current season infection, not seedborne infection. Affected tubers are not suitable for fresh market, processing, or seed. Net necrosis is not seen in all varieties.

Due to the use of new systemic insecticides in potatoes, PLRV is seldom seen in seed or in commercial plantings in the Columbia Basin.

Symptoms Plants from infected tubers show symptoms first on lower leaves. Leaves curl up around the midrib and may assume a leathery texture. Plants usually are yellowed and stunted, and older (lower) leaves may brown and die early. Symptoms are more obscure on plants that become infected during the current season. Leaf rolling occurs first on upper (younger) leaves; leaves may be pale green or chlorotic, with purple or reddish borders. Early-season infection may result in symptoms typical of tuberborne leaf roll.

Infected tubers of 'Russet Burbank' may show "net necrosis": small brown speckles or strands of discolored tissue that start at the tuber's stem end and which may extend as far as halfway through the tuber. The varieties, White Rose, Norgold, and others, do not develop as severe a net necrosis. Net necrosis can occur in the absence of foliar symptoms when plants are infected after leaves have stopped growing but tuber expansion continues. Incidence of net necrosis increases during prolonged storage, especially in medium and small tubers. Net necrosis can be confused with Zebra Chip.

Chemical control This virus is easily controlled by the use of insecticides. Monitor fields for aphid activity and control aphids. Early- and mid-season vector control is most crucial to prevent virus spread. Mid- to late-season control is important when growing varieties susceptible to net necrosis. See PNW Insect Management Handbook for details.