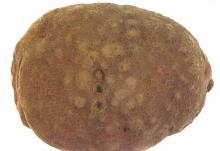 Note the bumps on the exterior of this tuber.
Photo part of OSU Extension Plant Pathology Slide

Symtoms of Meloidogyne chitwoodi before and after peeling.
Kathy Merrifield, 2000.

Cause The northern (Meloidogyne hapla) and Columbia (M. chitwoodi) root-knot nematodes are among the most important problems in potato production. Very low soil populations can result in significant damage. Both nematodes blemish tubers and may render them unmarketable. M. chitwoodi is more important than M. hapla, causing more severe tuber damage. Both are sedentary endoparasites, and only the second-stage juveniles (the infective stage) and adult males (which may be rare) are present in soil. The disease spreads by infected tubers (seed or commercial), reused irrigation water and via soil. M. chitwoodi continues to develop above 41°F, but M. hapla is not active below 50°F. M. chitwoodi can migrate up from 3 feet deep, particularly in sandy soils, and cause economically significant tuber damage.

Symptoms Root-knot nematode infection rarely causes aboveground symptoms in potatoes. External symptoms of M. chitwoodi are distinct pimple-like bumps and lumps on tubers. M. hapla usually produces a more general swelling on the tuber or none at all. Both species produce brown spots within the vascular ring, within 0.25 inch of the tuber surface. Brown spots are about 0.04 inch (1 mm) in diameter and are evident only when the female nematode begins egg production. The female's white body and egg sac containing eggs (egg mass) produced outside the body often can be seen with a hand lens in the center of the brown spot. Unless several nematodes are in the same area, the spots' borders are distinct. The spots should not be confused with symptoms of heat necrosis, which produces spots of similar size but more diffused. Tubers infected with late season infection of M. chitwoodi may not show visible external or internal symptoms at harvest but may develop them in storage.

Sampling Soil sampling is recommended. Sample soil any time before planting potatoes, provided the soil is not frozen or too dry or wet. However, it is best to sample in late summer or early fall, when nematode populations are higher, than in early spring. Nematode populations naturally decline through the winter. Thus, low populations in fall may not be detectable in spring. This is critical because low M. chitwoodi populations (less than one in 250 cu cm of soil) can cause severe economic losses. Sampling depth may be important, especially following deep-rooted crops such as alfalfa and field corn. Take soil samples before and after soil fumigation to determine the treatment's effectiveness; however, do not take samples within 2 weeks after treatment. Indicate whether samples are pre- or post-treatment, so live and dead nematodes may be distinguished. Control strategies may depend on the species of root-knot nematode, so request species identification when you submit the sample.

Chemical control No control technique ever eliminates nematodes from soil, and eventually they infect tubers. However, these recommendations have been shown to work well to reduce the disease's impact with proper fungicide use and when following soil sampling recommendations.

Monitoring Degree-Days: Soil degree-days (DD) should be monitored with in-field data loggers placed 6 to 8 inches deep in the potato row. DD accumulation starts at planting and is based from 41°F (5ºC). To calculate DD in Fahrenheit, take the average daily soil temperature (add daily maximum + daily minimum, and then divide by 2), and then subtract 41, which will yield the DD value for that day. Add the daily cumulative DD from the date of planting to track total DD.