Shoot dieback from this bacterial disease. 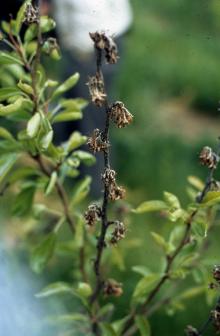 Whole shoots can dieback from this disease.

Under favorable conditions many shoots can dieback in the spring.

Flowering pear can be a host also as seen on this Pyrus betulifolia.
Joseph Postman, 2008.

Cause Pseudomonas syringae pv. syringae, a bacterium. Rain and low temperatures, especially frost-inducing temperatures during bloom, increase incidence of blossom infection. Although the bacteria survive on the outside of the plant they must get inside and multiply in the space between plant cells (apoplast) to cause disease. These pathogenic bacteria inject several proteins and small-molecule toxins to get past host immune mechanisms. Once inside, the bacteria induce a watery, nutrient rich environment between the plant cells where they can multiply and continue colonization of the plant tissues. Bacteria also produce a protein that acts as an ice nucleus, increasing frost wounds that bacteria easily colonize and expand.

Apple is not as susceptible and generally does not need control.

Symptoms Infection may cause blossom blast, leaf spots, dieback of twigs and spurs, dormant-bud death, and bark cankers. At first, bark cankers are light brown, irregular patches on limbs. Later, outer bark and some underlying tissues may wholly or partly slough away.

Chemical control Resistance to the active ingredients in these products has been detected in the Hood River, OR area.