Affected branches stand out from all the other branches. 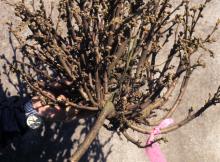 Normal branch becomes swollen and then numerous small branches emerge from that point. 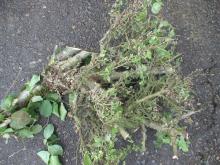 Leaves and stems may look normal green but are still stunted in growth.
Jeff Olsen, 2008.

Cause Unknown. Witches' brooms in hazelnut are an oddity that is seen every few years. Growers are curious about the problem but do not report that it affects production in any way.

Witches' broom symptoms were associated with hazelnuts infected with Candidatus Phytoplasma fragariae in Slovenia but trees with the same pathogen in the UK only had yellowing leaf symptoms.

Symptoms Normal sized limbs will develop a swelling from which a large number of small shoots arise. Shoots are slow growing with shortened internodes and smaller leaves. Brooms can persist for several years, become very large and weigh down affected branches. Similar in appearance to the fungal-induced witches' brooms of cherry or abiotic brooms of Douglas-fir.