Notice the white colonies on the underside of the leaf. 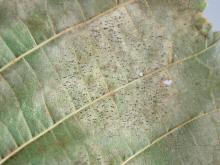 Cliestothesia form late in the year and can be seen as black (mature) to light brown (immature) spherical structures on this leaf.

Cause Phyllactinia guttata, a fungus that overwinters on fallen leaves and fallen infected twigs. Erysiphe corylacearum has been reported on Corylus californica. The conidia are readily wind disseminated. Chasmothecia develop within the external hyphae and form appendages late in their development. The uneven wall thickness and bulbous nature of the appendages allows the entire cleistocarp to be dislodged from the host. When dry, the appendages flex like a spider's legs and allow the cleistocarp to be dislodged and carried by wind.

Symptoms White powdery growth appears on the leaves' undersides but often not until late in the season. Small, round, black fruiting bodies (chasmothecia) also may be seen on the white growth. The disease causes little or no economic damage, and infected leaves seldom fall prematurely.

Cultural control In general, powdery mildew is not serious and does not warrant special control measures.