Leaf spots due to Mamianiella coryli. Small black stromata can be seen on the lower leaf surface with protruding perithecia. 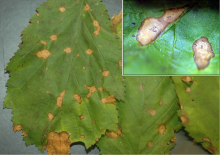 Leaf spots due to a pycnidial forming fungus.

Cause There are a number of fungi that can cause leaf spots on hazelnut. These are of minor importance in commercial production and are more common in native hazelnuts, hedgerows and abandoned orchards. Anthracnose is caused by Piggotia coryli and leaf blister (and leaf curl) by Taphrina coryli. Cylindrosporella coryli (formerly Phyllosticta coryli) , Septoria ostryae, Anguillosporella vermiformis, and Mamianiella coryli also cause various leaf spots.

Symptoms Anthracnose varies from inconspicuous brown spots to relatively large, irregularly-shaped chlorotic lesions that cause premature senescence. Bud rot and catkin necrosis have also been attributed to this fungus in Europe.

Phyllosticta coryli can cause small, circular, yellow leaf spots with pycnidia arranged in a central ring in the lesion. Septoria ostryae has similar symptoms but pycnidia are more scattered.

Mamianiella coryli will produce small, circular, yellow patches with green islands on the top of leaves in late summer. Small black stromata form in the centers of the leaf spots and are easily seen on the lower leaf surface. Protruding from the stromata are long beaks of immersed perithecia.

Cultural control In general, these are not serious and do not warrant special control measures. Sanitation of leaf debris in the fall, pruning for better air circulation or fungicide applications in the spring might be useful if needed.