Nuts on the right are healthy while nuts on the left were stored in the nut totes during wet weather. Those nuts were wet and developed mold problems.

Kernel spot occurs on each of these hazelnut kernels. 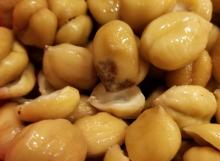 Kernel molds can persist even after blanching.

Kernel tips are blackened and shriveled, partly reducing kernel quality and is locally refered to as “Tip Mold”. 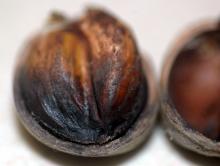 Black tips on kernels has also been associated with weak sutures in the shell.

Cause "Mold" is defined as any visible growth of mold either on the outside or inside of the kernel. In practice, it means any white, fuzzy mycelial growth is classified as 'mold.' Many different fungi are easily isolated from the shell or kernel, with surface sterilization, with or without any specific symptoms, before or after harvest. In Oregon, Penicillium spp., Aspergillus sp., Cladosporium sp. and Diaporthe rudis were frequently isolated from moldy kernels. Diaporthe eres was identified as the main cause of various hazelnut defects in the Caucasus region of Asia while Diaporthe foeniculina caused kernel necrosis in Chile.

Many of the following fungal problems would only be classified as decay or discoloration in the absence of active mycelial growth. Ramularia endophylla is consistently isolated from kernels with tip mold. A Phomopsis sp. and Septoria ostryae (formerly S. coryli) are commonly associated with internal discoloration. Eremothecium coryli (formerly Nematospora coryli), a yeast, is consistently associated with the disease known as kernel spot. Several other fungi have been isolated from shriveled hazelnuts. These organisms may be secondary opportunists that invade kernels that have been stressed physiologically, but all have been associated with kernels at shelling. Koch postulates have not been completed for any of the associated fungi. Insect vectors such as Lygus bugs or BMSB may be involved with yeasts.

In Oregon, moldy kernel incidence averages 0.5% to 1% annually; mold incidence in individual orchards frequently is much higher (3 to 10%). Fungi reduce kernel quality, but the degree varies with the causal agent and environmental conditions during symptom development. Mold is often highest if rains are significant in spring or during harvest. Mold can also be a problem when bins filled with nuts are grouped together and left out in the rain before drying.

The cultivars Lewis and Santiam generally have higher levels of mold than Barcelona in any particular year. Susceptibility to kernel mold is highly heritable and can be minimized when selecting new cultivars. In advanced selection trials, incidence of kernel mold was lowest for 'McDonald' (1-2%) and highest for 'Santiam' (8-17%).

Other kernel defects include: Insect injury which is generally due to filbert worm. Kernels are put in this category even if they also have obvious mycelial growth; Rancidity, which is evaluated solely by taste and not by visual characteristics; Shrivel which, is when kernels shrink and wrinkle due to moisture loss; Decay, which appear as a black (not brown) coloration that extends into the meat of the kernel; Internal discoloration of cut kernels shows a black coloration and not just brown which is considered normal.

Symptoms Most mold symptoms develop between nut maturation and when kernels are dried postharvest. The most common symptom in Oregon is a necrosis of the kernel tip where it attaches to the funiculus. Necrosis usually extends into the kernel a few millimeters. Kernel tips are blackened and shriveled, partly reducing kernel quality.

Internal discoloration of the kernel is another common symptom. Affected kernels change from a normal, opaque white to a translucent, buttery yellow and have a bitter, rancid flavor. The buttery yellow symptom is not always apparent on the kernel surface.

Chemical Control There are no chemicals registered for management of kernel mold.