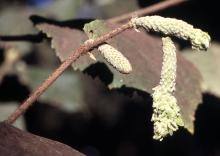 Deformed catkins where part of the catkin prematurely opens in late summer.

Note the bent and swollen catkin.

Cause Unknown. No investigations have been reported. The cultivar Barcelona tends to show it more than other cultivars, but it is on fewer than 5% of the catkins. The cultivar Yamhill routinely has catkins with kinks and brown tips. The problem is widespread throughout the Willamette Valley in Oregon and has been found in British Columbia. No adverse yield effects have been linked to this problem. Although the big bud mite will blast open dormant buds, no mites have been associated with these deformed catkins. Another theory blames hot weather during catkin formation.

Other oddities include catkins with what appear to be nut shells and surrounding husks and female inflorescences with a catkin protruding from the center (i.e., a ring of styles at the base of a small catkin). Again, nut production by these trees does not appear to be negatively affected.

Symptoms Part of the catkin prematurely opens in late summer but does not elongate. It is observed generally on the terminal portion of the catkin. The result is a bent or curved catkin that looks swollen on the end. Pollen also is shed from the deformed catkins.

Cultural control None known. Most likely, none is necessary.