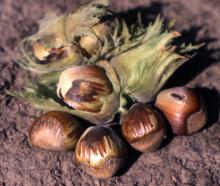 Note the brown, discolored tissue that extends between the vascular system of the shell. 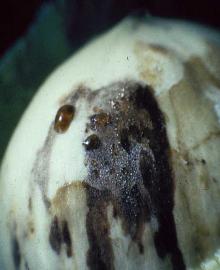 Brown droplets may be observed on the nut and/or husk.

Cause Unknown. Possibly a physiologic problem because no insects or pathogens have been associated with this problem. Severity of the problem changes from year to year.

Symptoms Brown stain is characterized by a brownish liquid that soaks the side or apical end of the nut. Staining begins when nuts are about half grown. The first symptoms are water-soaked spots between the vascular bundles on the shell that are softer than normal. Soon spots become brown to dark brown and sunken. Internal areas are affected later, producing a water soaking around the developing kernel. The entire interior of the shell, including kernel, may turn into a soft, brown, watery mass. Kernels may also be misshapen.

Cultural control None is known.