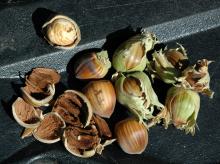 When cracked open, blank nuts have no kernel as the one on the top left does. Various blemishes can be seen on the outside shell of blanks.

Nuts on the ground here have fallen early before the main crop and will be ground up before harvest.

Cause The official definition of blanks is a shell containing no kernel at all or a kernel filling less than one-fourth the capacity of the shell. Pollination stimulates the shell to develop, but the kernel, for unknown reasons, fails to develop normally. The kernel either fails to grow at all, or it starts to grow but then aborts. Pollination failure is not the cause; if pollination had failed, the shell would not have developed at all. The cultivar Barcelona produces a higher proportion of blank nuts than other cultivars grown in the PNW. Environmental conditions are suspected such as cloudy wet conditions in May for the cultivar Butler grown in Portugal.

Feeding due to the Brown Marmorated Stink Bug early in kernel development has resulted in an increase in blank nuts.

Symptoms No kernel in the hazelnut shell. Kernels may develop a short time but then shrivel. These also are considered blank nuts. Blanks generally fall from the tree earlier than shells with kernels. Shells are much easier to crack open and may become necrotic.

Cultural control None is known beyond growing cultivars that inherently develop fewer blanks.