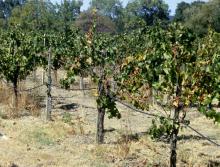 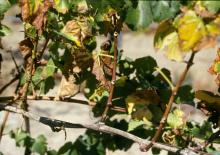 Irregular periderm formation along the cane is a good symptom of Pierce's disease.
Jay W, Pscheidt, 2002.

Cause Pierce's Disease, (Xylella fastidiosa subsp. fastidiosa),which has been a high-profile and rapidly increasing disease in California, and other Southern States, is not known to be in the Pacific Northwest. Our climate may be too cold for the pathogen to survive. Infected grapevines do not retain the pathogen after a cold dormant-season typical of continental climates. The disease is in Florida and Texas and can be very damaging. Sucking xylem-feeding insects, such as leafhoppers and spittlebugs, vector the bacterium. The majority of leafhoppers found in surveys are Western grape leafhopper, which is not an efficient vector of Xylella. The Blue-green sharpshooter vectors Xylella and has been found in the Willamette Valley, Columbia Gorge, Medford, and Milton-Freewater areas of Oregon. This leafhopper is usually found in surrounding vegetation and less in vineyards.

Another vector (the glassy-winged sharpshooter) was found in California during the mid-1990s. Unlike the blue-green sharpshooter this insect is not restricted to riparian areas. The presence of the glassy winged sharpshooter is having a huge impact on producers in southern California. Several glassy-winged sharpshooters were found near western Oregon ornamental nurseries in 2000. An extensive survey that fall of 291 samples from vineyards, native hosts, and nurseries did not find any evidence of the causal bacterium, Xylella fastidiosa subsp. fastidiosa. Surveys of Washington grapes by WSDA in 2017 also did not detect this bacterium.

Symptoms Symptoms appear when a significant amount of xylem becomes blocked by the bacteria's growth. Any other problem that blocks, inhibits or limits water from getting to the leaves will produce similar symptoms. Dryland grapes grown in western Oregon during the drought of 2001 displayed some of these same symptoms. Fungal cankers, damaged trunks, girdling roots, gopher damage, herbicide injury and root rots also can produce similar symptoms.

Usually only one or two canes will show Pierce's Disease symptoms late in the first season of infection. Symptoms gradually spread along the cane from the point of infection out toward the end and more slowly toward the base. Cane tips and roots may die back. Vines deteriorate rapidly after symptoms appear. Shoot growth in infected plants becomes progressively weaker as symptoms become more pronounced.

Control If you suspect you might have this disease, send samples to a plant disease clinic for evaluation.