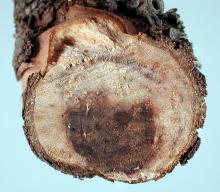 Viewing this 'Syrah' trunk in cross-section shows dark brown to black streaking in the vascular elements due to plugging of individual or aggregates of xylem vessels with amber to black gum (gummosis) and formation of tyloses. These symptoms alone are not enough for a definitive diagnosis. 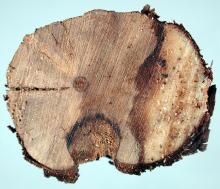 Petri disease, Phaeomoniella chlamydospora, was found on this 'Pinot Noir' vine. Much of the trunk is dead with only a small portion on the right side to provide water and nutrients to the vine. 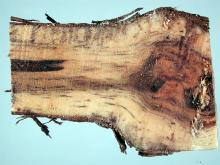 Trunk diseases usually are due to multiple problems. The vascular streaks here are due to Phaeoacremonium viticola while the dark streaking in the center was due to P. viticola and Fusarium. Diplodia was found on the exterior several inches above the graft union.
OSU Plant Clinic Image, 2013.

Cause Many fungi have been associated with these diseases, although the cause of esca continues to be disputed. Esca (black measles) is considered a disease of older vines. It is thought that initial infection of vines with Phaeomoniella chlamydospora and/or species of Phaeoacremonium (with Phaeoacremonium minimum being the most prevalent) is followed later by colonization by various basidiomycete fungi (up to 6 different genera). This succession of fungi leading to symptoms is still under investigation.

Decline of young vines has been variously known as young vine decline, Petri disease, and young esca. Several fungi have been associated with this disease including Phaeomoniella chlamydospora, 29 species of Phaeoacremonium, Pleurostoma richardsiae, and 6 species of Cadophora; Phaeoacremonium minimum and Cadophora luteo-olivacea are the most prevalent. These fungi are considered endophytic, but have the ability to become severe pathogens as a result of stress and poor cultural practices. In California, these fungi are widely distributed in vineyards aged 10-80 years old. Surveys in British Columbia found 7 fungal species associated with esca and petri diseases.

Vines are predisposed to the pathogens by stress, in particular water stress. Blocked xylem vessels aggravate water stress, leading to insufficient water and nutrient supply within the vine. This results in symptom expression, which usually becomes acute during periods of high-water demand. Symptom severity on leaves is directly related to the symptom severity in the trunk. Environmental factors and host stress such as malnutrition, poor drainage, soil compaction, heavy crop loads on young plants, planting of vines in poorly prepared soil, and improper plant holes also play an important part in the development of disease. The production of fungal toxins that are then translocated to the leaves and berries may also be involved.

Vines derived from infected mother plants are considered a significant source of plants infected with young esca. Esca is considered to be the result of unprotected pruning wounds. In California, wounds from pruning have been found to remain susceptible to fungal colonization for up to 4 months after pruning, although most infection occurred during the first two months. In general, pruning wounds made early in the dormant period are much more susceptible than wounds made late in the dormant period. Poor cold storage and transport conditions of nursery stock can also result in stress and cross-contamination can occur if infected material is present.

Symptoms Vine decline symptoms, caused by any of these pathogens, are indistinguishable and develop slowly in the first few seasons of vineyard establishment and production. Young vines generally appear normal at planting, but differences in vigor become marked: reduced caliper size of the trunk, shortened internodes, reduced foliage, and reduced leaf size. The first 3 to 5 years after planting, onset of foliar symptoms may appear as interveinal chlorosis, followed by necrosis and early defoliation. Wilting and shoot tip dieback may also occur. Uneven wood maturity, usually associated with rapid desiccation, is another common symptom. In older vines, affected leaves show a characteristic and severe interveinal chlorosis and necrosis, sometimes referred to as a "tiger stripe" pattern. Apolexy refers to the sudden appearance of symptoms and collapse of vines. This is generally seen only mid-season in areas with high summer temperatures. Berries may show purple or brown spotting on the skin.

Viewing trunks of declining grapevines in cross-section, dark brown to black streaking is evident in the vascular elements due to plugging of individual or aggregates of xylem vessels with amber to black gum (gummosis) and formation of tyloses.

Black gumming in the vascular system may be present. Black or amber streaks in the vascular elements are deposits of phenolic compounds in response to wounding, a general plant defense mechanism. Physical injuries to the grapevine due to root tearing, disbudding, or other trauma during production or planting can result in phenolic depositions and black discoloration, or even outright death of tissue as the result of injury to cambium tissues.

Symptoms of decline in young vines resemble other important diseases of grape including uneven wood maturity as in Pierce's disease, virus-induced incompatibility, and some nutrient deficiencies.

Cultural control Management starts with preventive practices in nursery mother blocks and propagation beds. Good management techniques, which include proper planting, irrigation, and fertility for young vines while avoiding devigorating stresses, both before and after planting, are very important for establishing a healthy and productive vineyard.

Chemical control Chemical strategies to control these pathogens are difficult, as traditional techniques used for the control of surface pathogens do not penetrate dormant grapevine cuttings sufficiently to control fungi inhabiting the vascular system. Soaking infected dormant cuttings or vines in fungicides before grafting or planting has reduced disease incidence and severity but none are registered for this use.

Biological control Use in conjunction with cultural control tactics such as thorough sanitation. Trichoderma sp. have been shown to help protect pruning wounds, basal ends of propagation material, and graft unions before infection. Use within 24 hours of pruning and again in 2 weeks.

Note: Opening trunks of symptomatic vines in the middle and inserting a stone to expose the rotten wood to the air is an ancient custom practiced in some European countries. This practice is believed to delay the recurrence of esca foliar symptoms, however, there is no evidence that it is effective.