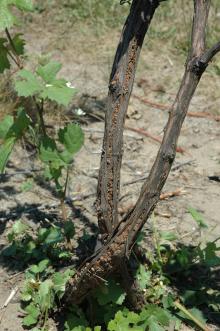 Fleshy, hard galls are typically found midsummer on the trunk, located at the root crown and on the first 2 ft of the vine above the soil line. 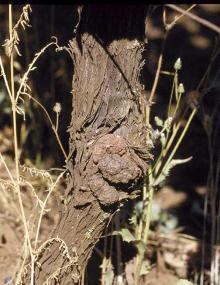 The crown gall has a cauliflower-like growth and is solid when cut into with a pocket knife.
Photo by Jay W. Pscheidt, 2000. 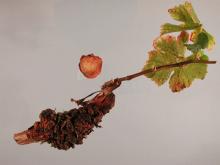 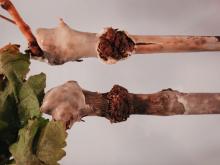 Galls can develp at the graft union of young plants.
Melodie Putnam, 2010.

Cause Agrobacterium vitis (which may also be called Rhizobium vitis or even Allorhizobium vitis), a bacterium that attacks only grape and chrysanthemum. Crown gall is most commonly found in regions with cold winters like southern Oregon and areas east of the Cascade Range. The bacterium survives for years in old galls, infected vines, and infected plant debris in the soil. It can enter the plant through wounds, such as grafting wounds, mechanical or cold damage, or pruning cuts. More often than not, the bacterium has already infected the vascular tissues of symptomless grapevines. The bacteria are systemic within the vine and may also have an epiphytic phase on green shoots including shoot tips and meristems. Despite this the bacteria are not found uniformly on or throughout the vine. Roots may provide a nitch for survival in the soil.

This bacteria is a genetic engineer that modifies the grapevine to make it a home and produce a food source. Winter damage that causes minor wounds can trigger the infection process. After the bacterium enters a wound, a small piece of its DNA is transferred into the plant's DNA. The foreign DNA transforms normal plant cells in the wounded area into tumor cells. Once transformed, tumor cells proliferate automatically and produce unique substances that the bacteria can use readily as a food source. The result is a gall, a disorganized mass of hyperplastic and hypertrophic tissue. Crown gall is a greater problem on grafted vines than own-rooted vines as the graft union can result in active gall growth even without winter freezes or mechanical damage. Necrosis in the graft union can inhibit graft take. Grape production can drop by 40% on affected vines. Crown gall is also a greater problem on younger vines with a smaller circumference.

Symptoms Fleshy, hard galls are typically found midsummer on the trunk, located at the root crown and on the first 2 ft of the vine above the soil line. Large galls may develop rapidly and completely girdle young vines in one season. Galls may also be numerous at or near graft unions. The galls turn brown by late summer then become dry and corky. After 1 or 2 years, dead galls may flake off the vine. Galled vines generally produce poor shoot growth, and vine portions above the galls may wilt, become chlorotic, and die due to the gall blockage. Infection of young vines may result in stunting and reduced productivity especially in the first two years after planting. Few clusters develop on these shoots and if fruit does form, it often shrivels or will not ripen. Galls are rarely seen on roots but the bacterium may cause areas of dark necrotic lesions on the roots.

Chemical control The efficacy of chemicals such as copper-based compounds, other chemicals and antibiotics is not satisfactory and thus not recommended.

Biological control Agrobacterium radiobacter K84 (Galltrol) is ineffective since it does not prevent infections. O Nonpathogenic Agrobacterium vitis strain ARK-1, A. vitis strain F2/5 and others have been shown to be effective but are not commercially available. Use of nontumorgentic A. vitis strain F2/5 with a knocked out gene has been shown to prevent root necrosis by blocking the infection process. These various strains could be used to prevent infection during grafting.