Grape showing continued 2,4-D injury the year AFTER exposure. Vines can show injury for several years due to one exposure. 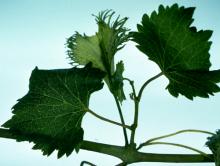 Note that the leaf from the main cane is deformed by 2,4-D but that the summer lateral is fine.
Robert Pool, 1976. 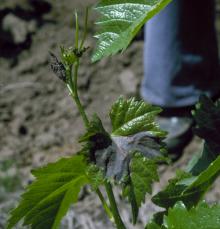 When applied during high temperatures, sulfur can burn leaves.
from Robert Pool. 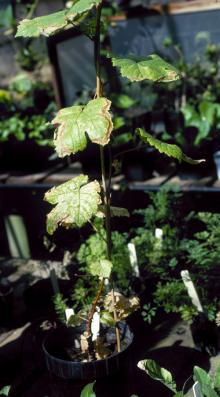 Roundup injury to potted grapes. Chemical was applied to the soil.
Robert Pool, 1977. 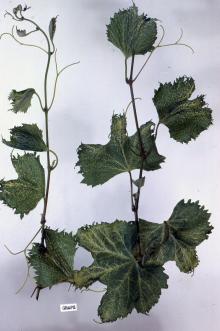 Injury to grape leaves due to a single application of boron at 1 lb/per acre.

Cause Several classes of herbicides and pesticides can cause damage to grapevines. Some of the most damaging chemicals are 2,4-D herbicides. Grapes are very sensitive and frequently are damaged by chemical drift from nearby applications. Grapes are most sensitive from bud break through bloom but can become damaged anytime during the growing season. The ester form, commercially available as Crossbow, Brush Killer, and other trade names, is more volatile than the amine form. Common uses of 2,4-D esters are blackberry and brush control and broadleaf weed control in grass seed fields. On warm days, the herbicide can volatilize from sprayed areas and move several miles downwind.

Other herbicides that are damaging include Dicamba, Glyphosate, Sulfonylurea, Imidazolinone and others. The most damaging time for herbicide drift is from budbreak to fruit set. Significant exposure to these herbicides can cause fruit deformation and potential crop loss, depending on the timing and intensity of the herbicide drift.

Sulfur products used for powdery mildew control can burn foliage when applied above 85°F. The temperature relationship is correlated with increases in the daily maximum, within a few days after application. Grapes in California can withstand sulfur applications (at lower rates) above 85°F if there are no major short-term changes in the daily maximum. Once vines are acclimated to higher temperatures the chance of burn is greatly reduced. Some grapes, such as labrusca types like 'Concord' and interspecific hybrids, are genetically sensitive to sulfur even at low temperatures. Application of horticultural oils too close to sulfur applications can also damage grape leaves.

Symptoms Leaves affected by 2,4-D herbicides have a distinctive fan-shape appearance with parallel, strap-like veins. These veins are clear and terminate in sharp points at the leaf margin. (Kind of reminds some folks of chicken feet.) Small, puckered, interveinal spots retain some green chlorophyll. In severe cases, clusters shrivel up. Can take up to 3 years to recover.

Sulfur burn appears first as a bleaching between the veins. These turn brown, necrotic and dry out becoming brittle. Defoliation may occur. Injured fruit can develop brown to black scar tissue.