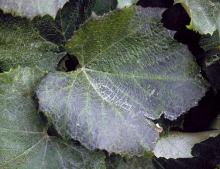 Note the darkened areas between the leaf veins.
Photo by Russel Smithyman

Cause Unknown. A leaf discoloration known as blackleaf, brownleaf, chocolate leaf, or blattbraune is a problem in eastern Washington. Blackleaf is associated with potassium deficiency, severe overcropping, poor soils, sun exposure, drought, and/or high summer temperatures. Whether these factors are directly responsible for blackleaf or merely correlative with symptom expression is unknown. Blackleaf is particularly noticeable in Vitis labrusca cultivars such as Concord. It has a negative impact on fruit ripening and quality.

Symptoms Symptoms usually appear near veraison. A discoloration of the mesophyll tissue (browning) is followed by a reddish-brown, blue-violet, or black discoloration of dots, flecks, or streaks within the upper epidermis. The discolored areas expand to cover over 50% of the leaf surface. Only the parts of leaves of the outer canopy that are fully exposed to sunlight develop symptoms. In severe cases, the entire sun-exposed leaf area becomes black and chlorotic, resulting in premature defoliation.

Classic potassium deficiency symptoms usually occur shortly after fruit-set in leaves at the midshoot position and are characterized by chlorosis originating at leaf margins and progressing to interveinal regions of the leaf. Unlike potassium deficiency injury, blackleaf has no particular pattern of origination within the leaf.

Chemical control The use of sun-blocking compounds is recommended for areas with a perennial problem.