Mycelial fan exposed by cutting just under the bark of affected tissues.

Classic mycelial fan just under the bark of affected tissues. 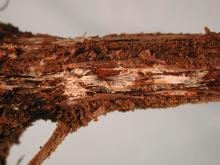 Diagnostic mycelial fans can be seen here beneath the bark of the root crown.
Melodie Putnam, 2010. 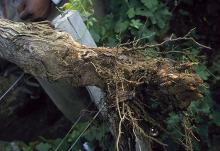 After scraping away the dead bark, a few white mycelial plaques can be seen on the lower portion of this vine.
Photo by Everett Hansen, 1997.

Cause Armillaria mellea, a fungus, infects vine roots, killing the cambium and decaying the underlying xylem. This is a soilborne fungus that is capable of attacking many different plant hosts. These fungi are most commonly found in forests and natural areas where they infect a variety of trees and shrubs. Therefore, the disease is most common in newly established fields that are planted on land recently cleared of native vegetation.

This fungus may form mushrooms at the base of infected vines in fall and winter. Mushrooms produce wind-blown spores, but these spores are not a significant means of infecting healthy vines. The fungus spreads vegetatively, below ground, which leads to the formation of groups of dead and dying plants called "disease centers." The fungus can survive on woody host roots long after the host dies. Its vegetative fungal tissue (mycelium) decomposes root wood for nutrients as it grows. When infected plants are removed, infected roots that remain below ground serve as a source of inoculum for vines planted in the same location.

Infection occurs when grape roots come in direct contact with partially decayed tree roots and are colonized by mycelium. Infection can also occur when grape roots contact rhizomorphs (black, shoestring-like fungal structures) that grow out from partially decayed roots and through the soil. Once vine roots are infected, whether they are living or dead, they serve as a source of inoculum for neighboring vines. The infection process takes months to happen. Spread between neighboring vines may take more than 10 years to occur. The disease negatively affects vine mineral-nutrition status and fruit quality.

Symptoms Mildly symptomatic grapevines are distinguishable from healthy grapevines only by having shorter canes. Severely symptomatic grapevines not only have shorter canes, but their leaves are dwarfed and may be chlorotic. Wilting, premature defoliation, and shriveling of berries also occurs. Symptoms worsen each year until the vine dies over the winter or shortly after bud break. Diagnostic mycelial fans can be observed beneath the bark of the root crown of infected plants. Dig down about a foot below the soil line and use a pocketknife to remove thin layers of bark from the root collar. Mycelial fans are thick, white layers of fungus that adhere to the inner root bark and/or the wood beneath the bark. Infected wood rots, losing structural integrity. Armillaria also makes black, shoestring-like structures called rhizomorphs, which are occasionally found within the bark and/or extending into surrounding soil. Rhizomorphs may look like roots on the outside but have an entirely different structure when cut open in cross-section.

Chemical control Although preplant fumigation is effective under the right soil conditions, the best materials are no longer available. Post-plant pesticide applications are not effective including soil fumigation or trunk injections.

Baumgartner, K. and Rizzo, D.M. 2002. Spread of Armillaria Root Disease in a California vineyard. American Journal of Enology and Viticulture 53:197-203.