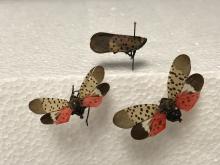 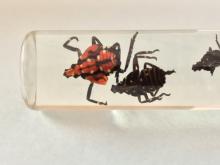 The spotted lanternfly is an invasive planthopper first documented in Pennsylvania in 2014 and has since spread to adjacent states and along the Atlantic seaboard states. This insect feeds on important crops such as grapes, hops and fruit trees as well as many hardwood trees and nursery stock. Dead specimens were intercepted at cargo ports in California in 2019 and in Oregon in 2020. Agricultural Departments in Washington and Oregon have surveyed for live lanternflies in crops over the past couple years without finding them. We call on readers of this handbook to stay vigilant for the spotted lanternfly and immediately contact agricultural departments, invasive species councils, or university Extension in your state.

Description and damage When in flight, this brightly colored planthopper has a one-inch wingspan and is easy to spot due to the flashing red coloration on the hind wings. When at rest, these hind wings are hidden under light grey-spotted forewings. The newly emerged nymphs are black with white spots while the older nymphs develop a red body color with white and black spots. While the adults are mobile, we suspect that the greatest risk of spread of this insect is due to the egg masses camouflaged to look like a smudges of mud found on various surfaces. At high densities, the adult female may lay the egg masses on just about any hard, smooth surface including vehicles, cargo crates, and much more. At high population densities, the spotted lanternfly reduces host plant vigor and productivity, but a primary problem is that this insect ejects large quantities of honeydew on surfaces beneath the infested plant including fruit and leaves. The honeydew feeds and promotes molds and fungal growth that further stresses the host and discolors surfaces beneath the infested host including manmade surfaces like cars, decks and the exterior of homes.

Biology and life cycle In the Atlantic seaboard states, the colorful adult planthopper is active from August to October. The nymphs are found on host plants between May and July. The egg stage is the overwintering stage for this species. While the adults and the nymphs can found feeding on the phloem of a wide range of plant species, the spotted lanternfly prefers to feed on the tree of heaven (Ailanthus altissima), which is considered an invasive pest (weed) of its own throughout the PNW.

Pest monitoring Since the spotted lanternfly is not established in the PNW, early detection is the best defense against this pest. Shipments of plant material or cargo from in and around the quarantine area should be closely inspected. The easiest way to notice this pest is by scouting the base of host trees, plants, and crops for adult activity (when in flight, the adults display those red hind wings) and look for signs of honeydew on surfaces beneath infested crops. While tree of heaven may be a good host plant to look for spotted lanternfly, removing this invasive plant from home landscapes and from borders of host crops is strongly encouraged.

Several invasive hornets, including the Asian giant hornet (AGH), have been intercepted in ports throughout the Pacific Northwest. In 2019, AGH was confirmed in and eradicated from British Columbia, Canada. In December 2019, WSDA responded to a public sighting and captured this hornet near the border of Washington State and British Columbia. During the 2020 season, citizen scientists, together with WSDA/WSU staff, placed over 2,500 hornet traps in northwestern Washington. In October of 2020, these traps helped WSDA locate and eradicate the first AGH nest in North America. WSDA continues to pursue and eradicate any reports of the Asian giant hornet.

Description and damage This hornet resembles our native yellowjacket wasps, but adults can be nearly 2 inches long. Adults have a distinctly yellow-orange head with prominent black eyes, black thorax and black/yellow striped abdomen. This hornet preys on other insects, gathers tree sap and raids the colonies of other bees and wasps for protein spoils. In late summer and throughout the autumn, this hornet will invade honey bee colonies and hives, decapitate bee workers and then feed on the colony brood and provisions. These hornets can sting humans and animals, but only when their nests are disturbed. If you suspect that you have a colony, do NOT attempt to remove or eradicate it. AGH will aggressively defend its own nest. Furthermore, this species of hornet will sting in self-defense, so do not handle any live specimen! The sting of AGH is more dangerous than that of other stinging insects in Washington since it can sting multiple times and deliver a larger dose of venom. Seek medical attention immediately if stung multiple times.

Biology and life cycle This hornet nests and forms colonies often in underground chambers early in the spring. During the summer, the nest expands in size and number. Between July to October homeowners are most likely to encounter foraging adults.

Pest monitoring If you suspect you have found a honeybee colony damaged by this species, or suspect you have encountered this large hornet, please report the finding to the State Department of Agriculture or local university Extension office. If safe, attempt to photograph the specimen and note what direction the hornet flies when it leaves. When confirmed as an invasive hornet of concern, these state agencies will respond and work with you to eradicate this pest as soon as possible.