Cultivars, such as Sweetheart, shed more fruit than other cultivars. 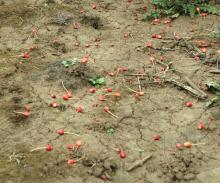 Some cherries drop early from the tree prior to harvest. 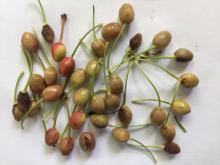 These cherries dropped early from the tree and typically are smaller, slightly dehydrated, discolored but not rotting and with green stems.

Cause The normal abscission of fruits that occurs before pit hardening. Also called "Cherry Run Off" in Europe. A certain percentage of fruit will drop due to lack of fertilization. Some cultivars, such as Sweetheart, shed more than other cultivars and some years are worse than others. There are 3 stages of drop. The first occurs about 2 to 2.5 weeks after full bloom, the second about a week later, and the third drop of a relatively few fruit about 3 weeks after the second drop. The exact mechanism is unknown but various explanations include lack of pollination, lack of fertilization, incompatibility, nutrient imbalance, winter injury, frost damage around bloom, and/or high temperatures during bloom.

Symptoms Green fruit that appear to be developing normally stop growing and fall from the tree. Fruit may turn shades of brown to gray just before dropping. Fruit may also look partially ripe with a blush of color.

Cultural control None needed since this is considered a normal occurrence.

Reference Bradbury, D. 1929. A comparative study of the developing and aborting fruits of Prunus cerasus. American Journal of Botany 16:525-542.