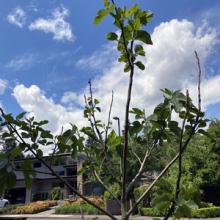 Not that several shoots on this fig tree have died back with new shoots arising below the damaged tissue.

Cold winters with freezing temperatures can also result in a dieback of shoots. Damaged tissue is often colonized by Botrytis.