Leaf spots are seen when bushes recover and grow new foliage even the year after inital symptoms are observed.

Bud on the left are healthy but buds on the right have died due to Blueberry shock virus. Sometimes you can find secondary infection by Pseudomonas in these dead buds.

Note the green stems but with blighted flowers. The healthy comparison stem is in the center of the picture. 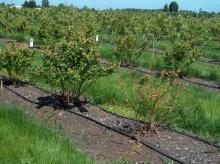 The bush without leaves on the right is showing shock for the first time. Other plants in the area appear healthy.
Jay W. Pscheidt, 2004

Cause The Blueberry shock virus (BlShV), which is pollenborne. Transmission occurs when pollinators, especially foraging honeybees, transfer infected pollen to flowers on healthy plants. The cultivars Berkeley, Bluegold, Bluetta, Cargo, Duke, Liberty, Aurora, Pemberton, Reka, and Elliott are particularly susceptible and the virus spreads rapidly through a field. In 'Bluecrop', 'Bluejay', 'Mini Blue', 'Calypso', 'Legacy', 'Perpetua', 'Reka', and 'Toro' the virus spreads very slowly in the field. The disease cannot be eliminated by removing and destroying plants with symptoms once it appears in a field. Plants that have recovered from the symptoms appear to produce a full crop, but these plants can continue to serve as an inoculum source for nearby plants and for any new plantings. Plants (such as Huron) that are infected within the first year or two after planting may be more seriously affected by this disease than older plants. The disease has been confirmed in Oregon (from Eugene northward), Washington and British Columbia. It has not been found in southern Oregon. Many states and countries require testing and certification of nursery stock as free of shock and scorch.

Cranberry was initially thought to be a symptomless host but it has been associated with cranberry fruit scaring.

Symptoms Flowers and young vegetative leaf shoots suddenly die in spring when flowers are just about to open. The entire bush may be blighted, but more commonly only a portion of the branches will show symptoms. These symptoms represent the plant's "shock reaction" to infection. Blighted tissues drop; as the season progresses, a second flush of leaves is produced. By late summer, affected plants look normal except they produce little fruit. Leaves that do not blight in spring may show thin red ringspots on both sides of the leaf. Plants may exhibit the shock reaction for 1 to 3 years and may be symptom-free thereafter although they still carry the virus.

Once plants recover, they may continue to show leaf discoloration including spots, line patterns, blotches and/or reddening for several more years. These "after shock" symptoms were intense on leaves formed during the cool wet spring of 2010 but lessened on leaves produced after warm dry conditions prevailed in the summer.