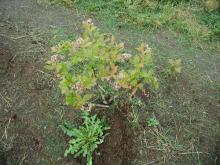 What looks like nutrient deficiency or high soil pH is due to lack of roots from root rot.
Wei Yang 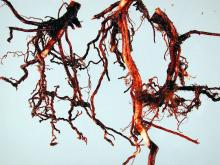 Phytophthora sp. was isolated from these roots. 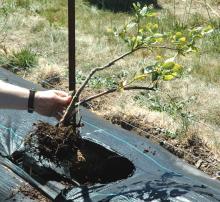 Poor growth on top and rotted roots below. Plant was easily pulled out of ground.

Cause Phytophthora root rot, caused primarily by the oomycete Phytophthora cinnamomi, is a soilborne disease affecting blueberry in the Pacific Northwest. It is primarily a warm weather pathogen and does not survive well where soils freeze deeply or repeatedly in winter. This fungus-like organism has an extremely wide host range and infects a large number of tree and shrub species in the Pacific Northwest including other ericaceous plants (such as rhododendron and madrone) and many conifers.

The organism is spread in water, soil, and on infected nursery stock. It can survive for many years in the soil as chlamydospores or oospores. When soil moisture is abundant, it produces swimming spores called zoospores. These zoospores swim towards fine roots where they infect and kill the root system. As a consequence, root rot is much more severe in poorly drained, heavy soils. The disease is often considered mainly to be a problem of young plants during the establishment phase. Older plants with larger root systems are better able to compensate for root rot without apparent symptoms as long as the site is well-drained. Use of fresh sawdust is conducive to these fungi in other crops while use of composed bark is suppressive.

While all highbush blueberry cultivars are susceptible to the pathogen, some, such as 'Aurora,' 'Clockwork,' 'Legacy,' 'Liberty,' 'Overtime,' 'Patriot,' and 'Reka,' appear to be slightly more resistant to the disease. Cultivars Bluecrop, Bluetta, Blue Ribbon, Cargo, Draper, Duke, Last Call, Top Shelf, Toro, and Ventura are considered very susceptible.

Symptoms Symptoms are usually most severe on young plants. Initially, infected plants are stunted, appearing smaller than neighboring healthy plants. The leaves may be undersized and chlorotic, and may turn red prematurely. Leaf scorch symptoms (necrotic leaf margins) can also develop as the root system becomes compromised. Severe infection can lead to wilting and death, particularly in younger plants or under conducive conditions. However, older plants with larger root reserves can survive for years with a chronic infection and may never fully succumb to the disease. Infection in the roots is first observed causing a brownish-black rot on the fine feeder roots. Lesions may extend up into larger roots and eventually up into the canes, producing a firm, reddish-brown rot that is delineated from the surrounding, healthy white-green tissue at the lesion's leading edge.

The Group 4 and Group P7 fungicides used to manage Phytophthora do not kill this organism. They can only prevent establishment of the organism before it gets into the plant. They can also prevent continued growth if the organism is already inside the plant thereby delaying symptoms that might have developed. Once chemical activity has subsided with time, the organism can resume growth within infected plants.

Reference Bryla, D.R. and Linderman, R.G. 2007. Implications of irrigation method and amount of water application on Phytophthora and Pythium infection and severity of root rot in highbush blueberry. HortScience 42:1463-1467.