Mummified fruit that have fallen to the ground. There is not much host tissue left as the fungus has taken the shape of the berry but it is now called a pseudothecium. These will overwinter and develop apothecia in the spring.

Primary symptoms of mummy berry on a floral cluster.

Primary symptoms of mummy berry on a developing shoot. 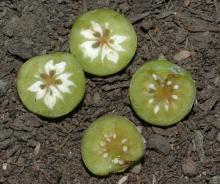 Infected green berries show no symptoms unless they are cut open. The fungus begins to fill the carpels of the infected berry on the left while seeds form in the healthy berry on the right.
Haywood Photography, 2005.

Note the discolored and drying fruit that will soon fall to the ground.
Photo by Jay Pscheidt, 1993.

Cause The fungus Monilinia vaccinii-corymbosi overwinters in mummified fruit (pseudosclerotia) on the ground. Mummies can survive for at least 2 years and maybe more. Often mummified fruit becomes caught between the stems of a single bush near the ground. Mummies have a chilling requirement of many hours below 45°F. In early spring, when the temperature rises above 45°F, about the time floral and vegetative buds begin to break, fungal fruiting cups (apothecia) grow from overwintering mummies in or near the soil surface. Apothecia mature over an average period of 17 days but can range from 8 to 28 days. Many apothecia can emerge from just one mummy. Soil temperature, soil moisture, and solar radiation were identified as the most important factors influencing ascospore release in the PNW.

Ascospores (primary inoculum) from apothecia are wind dispersed 100 feet or more and infect flowers and leaves shortly after buds open. A second type of spore (conidia or secondary inoculum) is produced in about 3 weeks on blighted flowers and shoots. These spores are spread by wind, rain, and various insect pollinators to healthy flowers. Flowers are most susceptible just as they open and infections lead to mummy berry symptoms. Flowers that are already pollinated are less susceptible to infection.

Infected, sporulating shoots become ultraviolet reflective, fragrant and secrete sugars all of which attract insect pollinators. Insects then move conidia from these infected shoots to healthy flowers increasing the number of infected berries.

All species of Vaccinium are infected by species of Monilinia causing a mummy berry-like disease in each. Each species, however, is highly specialized to its host and therefore cannot induce disease in other hosts. For example, the fungal species attacking red huckleberry cannot attack highbush blueberry and vice versa.

Symptoms Infected flowers turn brown and wither, as if they had been frosted. Stems and shoots turn dark-brown with the necrosis extending into leaf petioles and slightly into the base of leaf blades. Shoots quickly collapse and die soon after. About 3 weeks after primary infection, a brownish gray mass of spores develops on blighted flower stalks and leaves.

During early berry development, diseased fruits look like healthy ones; if cut open; however, the spongy white fungal growth can be seen within the carpels. As berries approach maturity, infected berries become a reddish buff or tan color in contrast to the waxy green of healthy fruits. Many of the diseased berries fall before healthy berries are harvested. Mature mummified berries are gray, shriveled, and hard.

Apothecia can be found under bushes where leaf debris or mulch has been left undisturbed. In spring, before bloom urn-shaped apothecia emerge from the mummies and are light brown to brown. The tip of the stem is darker and eventually expands into a cup-shaped structure 0.1 to 0.4 inch wide.

Cultural control Control tactics applied to the soil may need to be repeated often since apothecia develop and mature over a period of several weeks.

Organic control Control of mummy berry is difficult using organic tactics. Sulfur or copper-based materials have not resulted in effective protection of new flowers and shoots. Organic growers should then focus on reduction of overwintering inoculum. Scouting and aggressive removal of even the smallest amount of mummy berry during and after harvest can be effective in new plantings that do not yet exhibit much disease. Growers with small acreage should focus on removal of as many mummies as possible at and after harvest combined with aggressive disruption of developing apothecia in the spring. Efforts need to be 99.9% effective to have significant impact on this disease.

Note Some registered products offer only suppression of this disease and thus are not recommended for use. These products include Bravo Weather Stik, Double Nickel 55 (Triathlon BA), and Echo.

TNC Biological Fungicide is labeled for Oregon only but not recommended since it is of unknown efficacy in the PNW and is too viscous in solution during typical cool spring when applications are needed.

Forecasting A forecasting program was developed in Nova Scotia, Canada on lowbush blueberry. The program uses leaf wetness and temperature during the wetness period to predict infection. For example, a low risk of infection occurs with 6 hours of wetness at 43°F or 50°F. Use in western Oregon has found that just about every rainy period during apothecial sporulation is found to be an infection period.

Harteveld, D.O.C., and Peever, T.L. 2018. Timing of susceptibility of highbush blueberry cultivars in northwestern Washington to Monilinia vaccinii-corymbosi, the cause of mummy berry. Plant Pathology 67:477-487.s