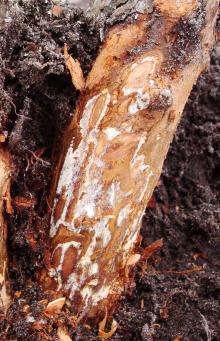 Diagnostic white mycelial fans are produced under the bark near the root crown and on larger roots.

Cause Armillaria root rot, also known as shoestring root rot, is caused by a number of Armillaria species, most notably Armillaria mellea and Armillaria gallica. Other newly described species from the Pacific Northwest, such as A. ostoyae, may also be involved, but their pathogenicity on blueberry has not yet been proven. These are soilborne fungi that are capable of attacking many different plant hosts. They are most commonly found in forests and natural areas where they infect a variety of trees and shrubs. Therefore, the disease is most common in newly established blueberry fields that are planted on land recently cleared of native vegetation. The pathogen can also be unintentionally introduced to plantings in infested bark mulch.

The fungus mainly spreads from nearby infected trees and shrubs or from buried, infested woody debris to new blueberry plantings via rhizomorphs. Rhizomorphs are black shoestring-like or cord-like structures resembling roots that grow out from an infected plant into the soil until they encounter the roots of nearby host plant. In this manner, the pathogen can spread from an initial focal point to neighboring plants, thus forming "disease centers" within an otherwise healthy field of blueberries. Infection begins when blueberry roots come into contact with mycelia or rhizomorphs of the fungus. The rhizomorphs grow along the surface of the roots and then penetrate inwards where the pathogen kills the cambium and begins decaying the underlying wood. Once a host is infected, the fungus can survive for years by using the large woody roots and basal stems as a food source even after the host plant dies.

Spores from mushroom fruiting bodies could potentially be infectious if they come into contact with recently wounded sapwood, but most new infections occur primarily through contact of healthy blueberry roots with rhizomorphs.

Symptoms Initially, infected plants appear slow-growing and stunted. Leaves may be small, chlorotic, and turn red prematurely in late summer to early fall. The entire plant may be affected or only individual canes may exhibit symptoms of the disease. When stems become girdled, leaves turn yellow, wilt, and the plant eventually dies. Young plants may be killed within a few months.

Diagnostic white mycelial fans are produced under the bark near the root crown and on larger roots. Use a sharp knife to remove the bark where thick white mycelia can be observed growing between the innermost bark and the underlying sapwood. Rhizomorphs may also be evident as black shoestrings or cords that grow on the surface of the roots and lower stem extending outwards into the soil.

Yellowish-brown to brown mushrooms occasionally form around infected plants in the fall. The mushrooms grow in clumps and have a distinctive ring around the stalk.

Cultural control Maintain good plant health. Plants that experience stress from either too much water or too little are predisposed to infection.

Chemical control Soil fumigation can also help reduce inoculum, but it is expensive and the site should be properly prepared to achieve optimal efficacy. Large roots and woody debris greater than 1-inch in diameter must be removed before fumigation occurs because chemical fumigants do not easily penetrate these materials and may leave a viable source of inoculum in the soil. In addition, soil fumigants are effective only to the depth that they are applied in the soil, so any inoculum remaining below the fumigation layer may reinfest the overlying soil once the fumigant has dissipated. Finally, plastic tarps, such as totally impermeable films (TIF) should be applied immediately after fumigation to help retain fumigants in the soil and increase efficacy.