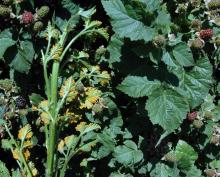 Infected primocane of Black Diamond with orange aecia on the left and healthy primocane on the right. 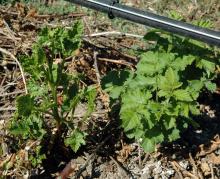 Many weak, spindly shoots (left side) arise from infected roots and crowns of these Black Diamond plants in spring (healthy shoots right side). 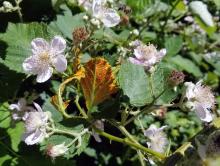 Upper leaf surface of Himalaya blackberry develops chlorotic spots and areas opposite where aecea develop below. 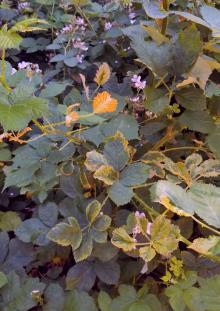 Orange rust can develop on wild blackberry. Note many of these Himalaya blackberry plants in this image are not showing symptoms.

Cause Gymnoconia nitens (formerly Arthuriomyces peckianus), a fungus that was rarely found in the Pacific Northwest but common in eastern North America. Records at OSU's Mycological Herbarium and Plant Clinic indicate that "orange rust" was found from 1913 to 1923 in Douglas, Hood River, Umatilla, Union, and Wasco counties of Oregon. In 1997, G. nitens was found on 'Kotata' blackberries in an isolated field in the Willamette Valley. The field was removed a few years later. The disease was found again in 2018 and in 2021 in several 'Black Diamond' fields in Marion County. The fungus was also reported from California on loganberry and thimbleberry. The disease has been seen on wild Himalayan blackberry (R. bifrons) in Benton and Marion counties.

The systemic nature of this disease is what distinguishes it from the other rust fungi on blackberry. Primocanes are already infected and form spores soon after sprouting from the crown. Infected plants cut in May to limit spread will resprout in June with spores.

Red raspberry is resistant while black raspberry are susceptible. Susceptible cultivars of blackberry include Black Diamond, Chester, Chickasaw, Navaho, Ouachita, and Triple Crown. Resistant cultivars have been listed but some have been found susceptible in other areas.

Symptoms Many weak, spindly shoots arise from infected roots and crowns in spring. Sometimes only one primocane may be infected making the disease difficult to find. Infected shoots may lack thorns and resemble weeds or plants with herbicide injury. Some primocanes and floricanes may look healthy later in the season, but floricanes never produce flowers due to systemic infection. In spring, unfolding leaves can be stunted, misshapen, and pale green to yellow. Lower leaf surfaces become covered with blister-like pustules (aecia). Aecia are waxy at first, then turn a powdery bright, almost fluorescent orange. Infected black raspberry leaves may wilt and drop off or may develop brownish black pustules (telia) on the lower leaf surface. Might be confused with cane and leaf rust, which has dull, more yellowish pustules, or with blackberry rust.

Chemical control None will cure existing infection as they only prevent new infections. Herbicides can be used as a spot treatment to kill infected plants.

Note: Some registered products offer only suppression of this disease and thus are not recommended for use. These products include Cabrio and Pristine.