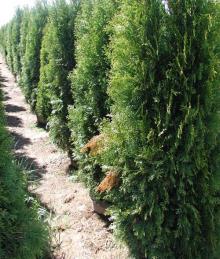 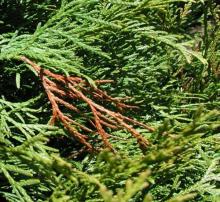 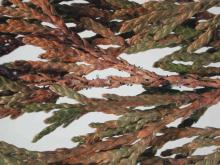 Note sporulation of the fungus in the center of the image. 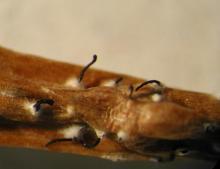 These black strings are called cirri and are packed with spores of the fungus. 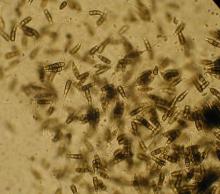 Cause The fungus Pestalotiopsis funerea is common problem on arborvitae samples coming into the OSU Plant Clinic. The fungus can colonize tissue damaged from other pathogens, insects, freeze injury or sunscald. Other stresses include being pot bound, too much or too little water or fertilizer. Spores are disseminated from diseased tissue by splashing rain. The fungus has a wide host range of many different conifers including Berckmann's Arborvitae (Platycladus orientalis) and has been associated with leaf and stem blights, cankers, diebacks, and even root rots of these hosts.

Symptoms Twig tips turn brown to tan and when examined closely may have black fruiting bodies (acervuli) of the fungus emerging from the dead tissue. Damage from the cypress tip moth can look similar but is not common on this host.