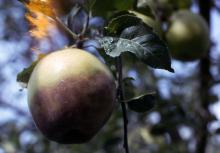 Note the discoloration at the base of this 'Golden Delicious' fruit.

Cause Phytophthora cactorum, a soilborne fungus-like microorganism frequently carried in irrigation water. Fruit rot has caused significant loss of fruit where irrigation water wetted fruit, usually on lower branches or from overhead irrigation for summer fruit cooling. As little as 1 hour of fruit wetting is needed for infection. Apple susceptibility increases 10 days before harvest. Can be a problem not only on pome fruit but also stone fruit such as peach.

Symptoms Firm, tan-colored, rotted spots on areas up to more than 1 inch in diameter on the fruit. Older infections can cause the whole fruit to rot on the tree. Can be confused with fire blight on immature pears but is lighter in color and soft to the touch. Some years, disease also may spread to fruit pedicels and a little way into first-year wood, causing a dieback that resembles fire blight.