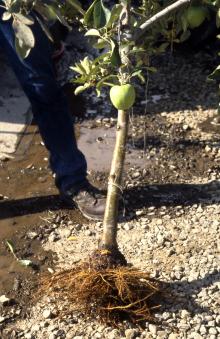 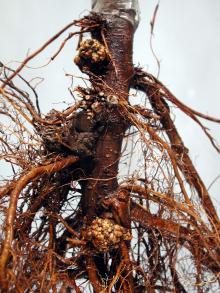 Note galled areas on the rootstock of EMLA 29. 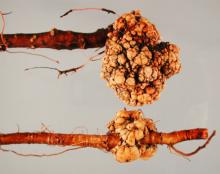 Note: In the Pacific Northwest, Malling 7 is considered the most susceptible apple rootstock to Rhizobium rhizogenes (formerly Agrobacterium tumefaciens), followed by Malling 9 and 26.

The Mark rootstock, while susceptible to Rhizobium, has another gall-like problem that resembles crown gall. The cause of this other gall is unknown but appears to be genetically inherited in this particular rootstock.

Biological control Crown gall on apple has been much more difficult to control than on Prunus species. Agrobacterium radiobacter K84 has been largely ineffective against apple crown gall unless disease pressure is low.