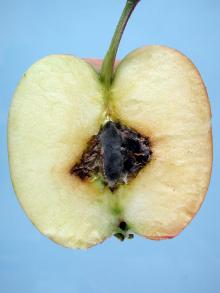 This 'Fuji' apple had Alternaria sp. in the core.

Cause Several different fungi can colonize the open sinus of certain apples such as 'Delicious', 'Golden Delicious', 'Gravenstein', and 'Idared'. These cultivars have an open sinus that extends from the calyx (flower) end into the core. Alternaria alternata and A. tenuissima colonize the floral tissue during flowering and cause a dry core rot. Mild temperatures and wet weather during bloom (as is typical of west-side locations) are favorable for disease development. Many other fungi have been associated with these same conditions. Penicillium spp. and other fungi can cause a wet core rot in the same location. They may get into the core naturally or when apples are placed in a dunk tank after harvest.

Symptoms Growth of fungal mycelium within the locules but not the mesoderm of the fruit is characteristic of moldy core. Dry core is defined as a slow dry and corky rot that affects the tissue around the core. Wet core rot generally develops more in storage but is an aggressive wet rot that may cause partial or complete fruit rot. External symptoms are generally rare and in some cases can be confused with codling moth damage.