Cankers may be flattened, have sticky ooze droplets called gumosis, and the vascular cambium is necrotic and discolored when exposed as in the middle of this branch.

Gumming due to bacterial canker on either side and in the middle of a score mark meant to manage the disease.

Upper portions of the tree wilt and die when cankers girdle branches.

Dead bud "disease" is first noted as dying buds on spurs in spring. Cankers seldom form, but the diseased buds may produce a slight gumming.

Cankers become flattened due to the death of the vascular cambium. They may also be discolored and accompanied by gummosis. 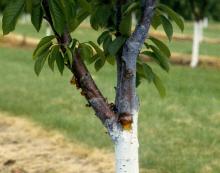 Bacterial canker is often observed on young trees starting to bear fruit. Note the extensive gumming along the trunk. 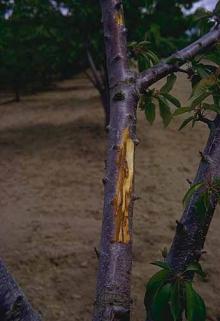 This bacterium can also cause spots on fruit and leaves.
Photo by Iain MacSwann, 1984.

Cause Pseudomonas syringae pv. syringae, a bacterium. This disease can be the limiting factor against establishing a cherry orchard anywhere in the Pacific Northwest. Although the bacteria survive on the outside of the plant they must get inside and multiply in the space between plant cells (apoplast) to cause disease. These pathogenic bacteria inject several proteins and small-molecule toxins to get past host immune mechanisms. Once inside, the bacteria induce a watery, nutrient rich environment between the plant cells where they can multiply and continue colonization of the plant tissues. Bacteria also produce a protein that acts as an ice nucleus, increasing frost wounds that bacteria easily colonize and expand. Factors that weaken or injure the tree predispose it to developing cankers. These factors include wounds, frost damage, early dormant season pruning, heading cuts, incorrect soil pH, and poor nutrition. Important avenues of infection leading to tree death include natural leaf scars in the fall and heading cuts made in the spring after planting a new orchard. Infection by other pathogens including Cytospora, Verticillium, and Nectria can lead to more bacterial canker. Ring nematodes have also been associated with increased susceptibility to bacteria canker in both cherry and peach. Sources of bacteria include old cankers, healthy buds, systemic infections within trees (with or without cankers), as epiphytes on leaf surfaces, weeds, grasses, and even soil. Wind, rain, insects, infected bud wood, and infected nursery stock can spread bacteria. Pruning through cankered and then through susceptible, healthy tissue does not spread the disease.

Although bacterial canker is more serious on sweet cherry trees, it also affects almonds, apricots, peaches, plums, and prunes. The same bacterium also can cause a blight of many other fruit, vegetable, and ornamental crops.

Symptoms The most conspicuous symptoms are cankers, gum exudation, and dieback of girdled branches. Dead buds and leaf spots also can occur. In most cases, heavy gumming is associated with bacterial canker formation on branches and twigs. Gumming occurs at the cankers' margins. Other problems can lead to gumming (see Cherry Prunus spp. - Gumming).

Chemical control Copper-based products have not worked well under conditions favorable for disease development. Bacteria resistant to copper products have been detected throughout our cherry growing regions, which compromises chemical control tactics. In small plot disease control trials it is not unusual to find copper-treated trees with more disease than trees without any treatment. Heavy use of copper products is not recommended as concentrations in the soil can build up to toxic levels after several decades of use. Resistance to antibiotic can develop quickly even with minimal use. Minimize the use of Kasumin by using it to protect trees after planting when making heading cuts and once during early flowering.

Biological control Although registered, the few that have been tested on similar diseases in the Willamette Valley have had none to poor efficacy.